It has been some time now since Revit has released its latest edition – Revit 2021. Among other features and improvements, it has one significantly useful new tool called “Slanted Walls”. Today, we will explore how to use this tool and why should we be happy to have this feature.

Previously, drawing walls that are at an angle to the horizontal, or to the general direction of other normal walls, has been a major pain. In the past versions, you would have had to use the “Mass” option, and combine it with the “Curtain” feature. That is complicated, error-prone, and could quickly get messed up. However, in Revit 2021, there’s a simple tool you can use to draw angled or leaning walls without all that mucking around in mass and curtain tools – that is the Slanted Wall feature.

How to use slanted wall in Revit 2021

Now let us see how to use the Slanted Wall tool in Revit 2021 in 3 easy steps.

Revit uses a cross-section parameter for all wall type objects. Go to the wall properties box, find the “Cross-Section” parameter. It will be defined “Vertical” by default. Open that drop-down list and you will see a “Slanted” option is also there – select that.

Keep an eye in that box while you perform the above step – it will change a bit as soon as defined the wall as slanted. Specifically, a new parameter will appear below the cross-section now, it will be labelled “Angle from Vertical”. 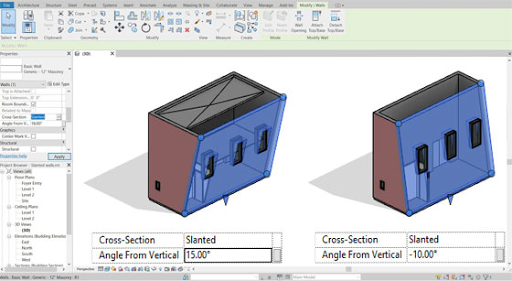 Point Cloud to BIM Process - What We Know So Far

At the point when we talk about Scan to BIM, we talk about a cycle and arrangement of steps that we actualize to get a genuine portrayal of the current states of a venture. We may scrutinize its materialness and about who all can utilize this cycle.

Therefore, keeping it brief, when we have a current structure set up and we need to bring a few adjustments like retrofitting, remodel, restoration, or remaking; where we intend to keep built up structure and framework set up. In that situation, it is imperative to have a nitty gritty and precise portrayal of the current states of the structure.

A 3D laser scanning gadget is utilized to catch the current conditions, the scanned information is as "Points" when a great many such points are consolidated together that plans as a Point Cloud Scan. A Point Cloud Scan is then brought into a 3D Modeling stage to make an As-fabricated model.

The expected utilization of Scan to BIM cycle can be for: site confirmation, plan approval/planning/correlation, create as-assembled drawings, impedance checks, MEP or development components destruction, or expansion, documentation of existing structure conditions, amount take-off, and spending assessment. During the time spent documentation, coming up next are levels of documentation:

Execution of a Scan to BIM venture can be extremely testing, to actualize the task effectively we have made a bit by bit measure, which is portrayed beneath and includes four stages – Capture, Process, BIM Modeling and Quality Assurance and each of the four stages ought to be executed according to BIM Execution Plan (BEP/BXP) and according to extend work process.

A purpose-built BIM solution like Revit features computable building information that enables a model to be understood by a computer as a building. A wall for example, "knows" what it is and how to react to the rest of the building.

As such, it can be scheduled or quantified as a wall: a building assembly made of real materials. Computable building information supports numerous building design and construction activities: structural analysis, MEP system modeling, building energy analysis, and specification management, to name just a few.

Cost estimating is yet another aspect of the building process that can benefit from computable building information. Designing a building is the responsibility of architects, whereas assessing the cost to build it is the domain of estimators. In general, the architect’s scope of work doesn’t extend to material takeoffs or cost information. That’s left to the estimator.

When preparing their cost estimates, estimators typically begin by digitizing the architect’s paper drawings, or importing their CAD drawings into a cost estimating package, or doing manual takeoffs from their drawings.

All of these methods introduce the potential for human error and propagate any inaccuracies there may be in the original drawings.

By using a building information model instead of drawings, the takeoffs, counts, and measurements can be generated directly from the underlying model. Therefore, the information is always consistent with the design. And when a change is made in the design – a smaller window size, for example – the change automatically ripples to all related construction documentation and schedules, as well as all the takeoffs, counts, and measurements that are used by the estimator. 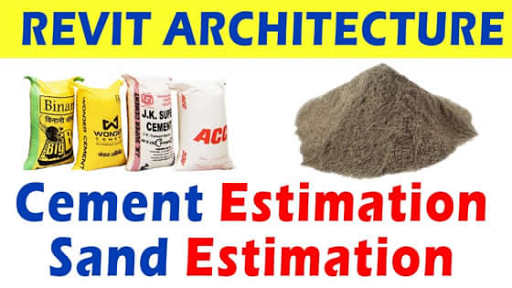